Here are some simple wide receiver patterns. Some people call this the “passing tree” or “passing routes.” Every wide receiver needs to know these basic patterns and how to run them. The sharper and crisper your turns, the easier it will be for you to get open.

In this scheme, the odd numbered routes go to the outside, while the even number go inside. At the college and pro level, wide receiver will have to know the numbers that represent each pattern, and the play will be called like “689.” The three wide receivers will know which number belongs to who.

In backyard football, the quarterback will usually call the wide receiver routes by the name of each route, to make it easier. And he may even draw them on his chest or the ground, in case someone doesn’t know the routes.

INTRO:
Always line up the same way, no matter what pattern you are running. Don’t give it away by lining up differently. Some guys line up differently for short patterns than they do for deep ones. Also make sure you run every pattern hard, as if you are going to get the ball on every down. You have to sell it. Every little detail matters. Safeties have to rotate, DBs will turn, linebackers will bite or freeze. Make sure you always look like you are getting the ball. And in most competitive leagues, you never know, anyone can get the ball. If you run every pattern hard, you will eventually get the ball, because defenders will screw up and fall or become confused. Run every pattern like your life depends on it.

0. In: This is the basic In pattern. You go up the field then cut in toward the center of the field at a sharp angle. If on other side, just reverse it. Sometimes this is also known as a Drag.

0. Dig: The In route can also be run as a dig. You run up the field about 3 yards, really hard, then come back at a 45 degree angle toward the QB. Square up so your legs are straight. Find an opening and sit there.

1. Out: This is your basic Out pattern. You go up the field about 5 yards, then take a sharp Out towards the sideline. If you are on the other side of the field, go to the other sideline. Make sure it is a hard 90 degree angle, this way the defensive back (DB) will not be able to get to you. The QB will have you wide open.

2. Slant: This is the most famous and most used short route in all of football. As soon as the ball is snapped, take 3 hard steps forward then an angled path towards the center of the field. You will get the ball quickly, before you reach the end of your route. The QB will most likely throw it while you are still running straight, so be ready to catch. This is a great pattern if the defense is blitzing. Try to get behind the linebackers. In order to run this properly, you have to line up properly. If you are on the right side of the line (as pictured above), your inside foot should be forward, and your outside foot should be back in your stance. Why? When you take your three steps, you cut hard on your outside foot, this allows you to make the quickest, sharpest, most unexpected cut to the inside. The cornerback won’t have time to react. If you notice, NFL receivers always line up with their inside leg forward. (the inside leg is the one closest to the offensive line)

3. Deep Out: This is similar to the out, except it is run at 10 yards. Go straight up the field hard, like you are running a Go route, then turn very hard, 90 degrees, to the outside.

4. Comeback: Also called a deep Dig or deep In.You go up the field, then quickly comeback to the QB. He will hit you on your way back. May also be modified to a “Stop”, “Dig” or “Hitch” which means rather than comeback, you just stop and wait for the ball.

6. Deep In: Also called a Deep Comeback. You go up 10 yards, then drag across the field. You can do this in front of, or behind, the linebackers. You can also stop and Comeback to the QB, finding and empty area in the defense.

7. Flag: Also called Corner or Chair or Post Corner. Run down the field hard. Fake a step in toward a Post route (sell it well), then take another turn for the corner pylon in the back of the endzone. You basically fake a deep Post, then turn for the corner of the endzone. Pylons may also be called flags, hence the nomenclature. TEs may also do this pattern. It can be run from either side to either back pylon. Depends on where you line up.

8. Post: This is the most famous and most used deep route in football. Go up the field, then cut to the goal Post. This is usually a deep play for a lot of yards. The post being the ‘goal post’. If no post exists, go to the center of the field.

9. Go: Also called a Streak or Fly. Just keep running down the field fast. Outrun your defender. Especially useful if your defender is playing you very tight. Make sure the fastest receiver on your team gets to run this route, it works very well.

10. Stop N Go: Also called a Chair. Go up the field a few yards, then turn around as if you are getting the ball, the QB will pump fake. Then take off down the field. Your defender will be confused and fall down.

12. Short Post: This is similar to the post, but shorter. It’s in between teh Slant and the Post. When defense is in cover 2 (i.e. they have two safeties) one will play short, one deep. This pattern is designed to get the receiver in the empty area in between. It works well especially if two receivers team up on the same side, one stays short, the other Streaks. Also works if the DBs and Safties are playing short and deep zone. You get the area in between.

Overall strategy:
If the defender is playing way off of you, do a quick Slant. Your QB will know this. Or just don’t move and he can quickly throw it to you.

If the defender is playing very tight, go for a Post, Go, or a deep Slant.

You should easily be able to tell what pattern will work on the defense presented. If you notice the DB giving you the inside route, take it with a Slant, or In. If they are opened up allowing you to take the outside, go for an Out, Go, or Hitch.

Another look without the numbers. Common names of some of these routes and names for the RB routes. 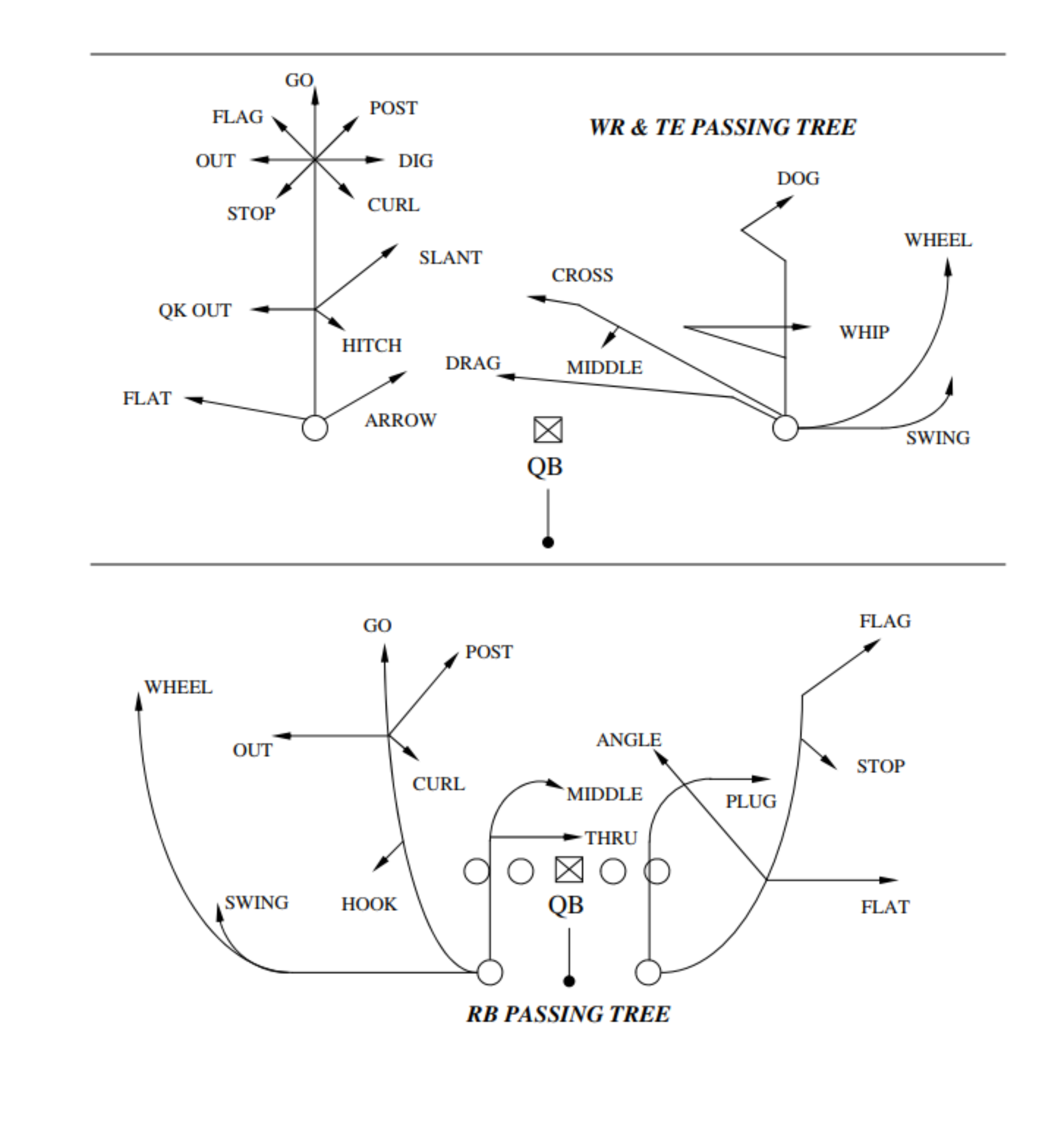 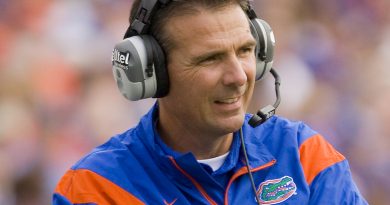