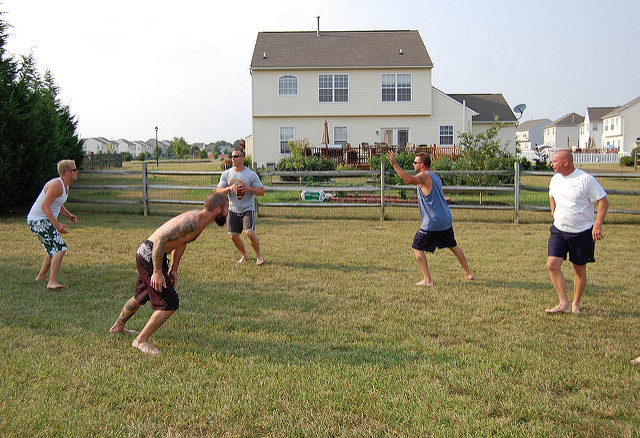 Ever dream of being John Elway, but lacked the size? How else can you emulate your favorite quarterback? Do you want to be Joe Monatna for a day? Do you want to impress the ladies with your catching ability? Ever wondered if you could pull off the same moves that Barry Sanders did? Catch like Jerry Rice?

In fact, you could say that backyard football is constantly being played all the time. Somewhere someone in the country is throwing the pigskin around with some buddies. It’s a phenomenon and American tradition. Backyard football is the cornerstone that most family reunions are built around. We all have that cousin or uncle that lives for the annual family Turkey Bowl during the Thanksgiving gettogether.

In it’s very basic form, backyard football is nothing more than a few friends and a ball. Backyard football is a variation on the sport we are so accustomed to watching on television. Whether it’s the NFL or college level, football is exciting, and everyone wants some action.

At family reunions and at all kinds of college and high school activities, everyone wants to throw around the good old pigskin. It starts out with a two people throwing the ball around. Then a third person shows up and wants to cover the guy catching. Then you end up playing ‘try to cover me’ and little bit of route running. A few minutes into this a few more people may jump in. Pretty soon you have an all out backyard football game.